Workers at the Port of Los Angeles have filed a California labor lawsuit against a distribution company, California Cartage, and a staffing company, SSI Staffing.  The lawsuit filed in Los Angeles County Superior Court in December, alleges the workers are owed millions of dollars in wages since the defendant leases land from the city of Los Angeles and therefore must pay a “living wage” instead of the minimum wage. 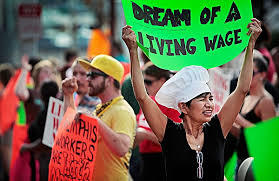 Key to the lawsuit is Los Angeles' Living Wage Ordinance.  Under the Ordinance, workers for companies operating under certain license agreements are owed at least $11.03 an hour if they receive medical benefits and $12.28 an hour if they don't receive medical benefits. Additionally, they are to be given 12 paid days off per year. The plaintiffs allege that because California Cartage leases land from the city of Los Angeles, it is subject to Los Angeles' Living Wage Ordinance.

According to a December 18, 2014 Los Angeles Times article, the plaintiffs allegedly are paid between $9.00 and $10.20 an hour, receive no health benefits and are only entitled to four paid days off per year. The workers also allege that they are not paid for days when they report to work but are sent home and are not always paid overtime when their shifts run long. The L.A. Times also reports that the lawsuit could cover more than 500 workers and involve millions of dollars in unpaid wages.

According to the defendant, California Cartage, 80 percent of its workers are employed by temporary agencies such as SSI Staffing, the company with which California Cartage reportedly subcontracted its staffing.

The city of Los Angeles points out in its documentation of the Living Wage Ordinance, that low pay has a negative effect on the quality and quantity of services rendered while fostering “high turnover, absenteeism, and lackluster performance.” The city further notes that not receiving a living wage makes it difficult for workers to live in Los Angeles. As such, the Living Wage Ordinance requires certain firms to pay an hourly wage above minimum wage and provide a minimum number of paid days off per year. The ordinance covers not only contractors but also subcontractors.

Companies found in violation of Los Angeles' Living Wage Ordinance could face a lawsuit filed by employees, who could receive back pay, attorney's fees and damages for willful violations of the ordinance.

Are you entitled to a living wage?

Are you or someone you know currently employed in Los Angeles with concerns about Los Angeles' Living Wage Ordinance?  If so, don't hesitate to contact leading California employment lawyers from Kingsley & Kingsley to take advantage of a free initial consultation. To discuss your situation call us toll-free at (888) 500-8469 or clicking here to contact us regarding your case.